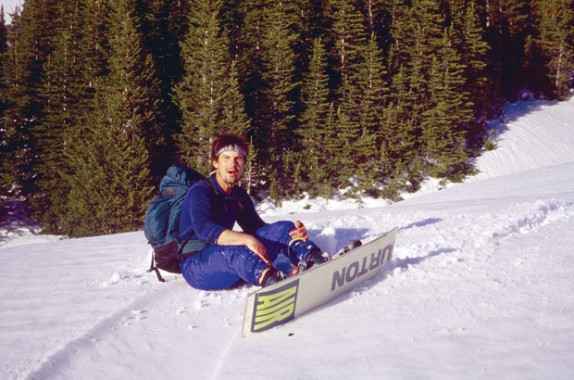 Smells Like Nostalgia: Schnitzspahn in the Montana backcountry in the early ‘90s. Photo courtesy of Jay Moore

Back in high school in the ’80s in New Jersey, I borrowed a friend’s Burton Performer Elite (basically a plank with straps), laced up my construction boots and headed out in search of hills with snow with my friend Mike. Most ski areas still banned snowboards back then. It was backcountry of a sort, even if the vertical was pathetic and coverage worse. And the way I rode that primeval board was damn ugly. But it was rebellious, un-tethered. It wasn’t the skiing that only the rich kids could afford.

After college, I moved out West for good and while my new ski-bum friends told me I would have to perfect telemark skiing if I wanted to explore the backcountry or climb Denali with them, it took me a long time to master the art of knee-dropping. So I would head out with my friend Jay into Montana’s Madison Range with our boards lashed to our packs. I had upgraded to a purple-and-pink Burton Air at this point, and it would slam against the back of my head as we postholed for hours out into the backcountry. We found steep meadows filled with powder and even put a big descent down a mountain called the Sphinx. The board was about the backcountry for me.

Eventually, I did master telemark skiing, and mountaineering. I spent fewer days on my board. I would still get out when I could and ride sideways, but the backcountry was far easier to access on freeheel skis. And I felt more drawn to that mindset. I still had a blast riding park and pipe and even plowing through powder, doing the things a board does best at a resort, but snowboarding was becoming more and more about a SoCal attitude that didn’t excite me. I just wanted to commune with the peaks.

The snowboarding industry is in a transitory state right now. The youth movement that used to give it all that attitude is more interested in skiing now (“Snowboarding is what my parents do”). Burton just announced that it will be shutting down some of its ancillary brands. All those independent, weed-smoking, full-of-soul manufacturers are taking real jobs. If you walk through the snowboard aisle at the SIA show in Denver, the energy feels a bit tired—except when it comes to, oddly enough, the backcountry.

Snowboarding is returning to its real roots.  Split boards are making the backcountry easily accessible without having to learn to tele. And athletes like Jeremy Jones are celebrating the sport not for the silly, SoCal, “sorry-dude” stereotype that stuck with it for so long but for where it can move forward. Jones’ latest movie, “Further,” puts him out there showing where he can go and what he can do with an attitude of nothing more than living to ride. It won’t be long before kids start thinking about snowboarding as a form of rebellion again—but maybe as one that gets them out like Jeremy Jones riding for the love of it.

I have a Jones Mountain Twin that was just waxed. I’m going to make sure to take it out to the resort this year, and even further.