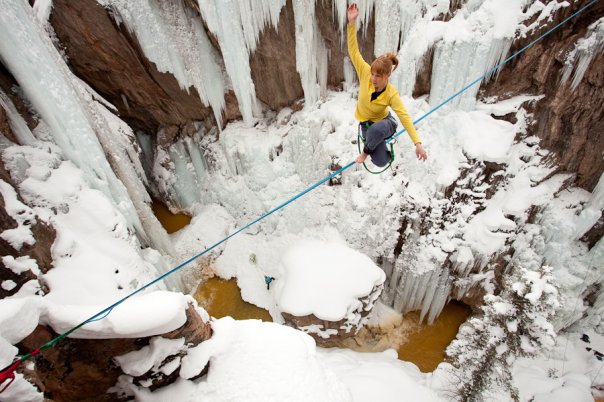 In early February, I caught up with seasonal Yosemite Search and Rescue (YOSAR, or SAR) team member, big-wall speed climber and highliner Libby Sauter, 27. “And getting older every day,” she said, giggling.

I first met Sauter three years ago, shortly after she joined the team, outside her canvas tent at the SAR site (the park’s rescue team housing area located on the west end of Camp 4). I was on assignment for Climbing magazine composing 10 Things You Didn’t Know about YOSAR.

Most recently I saw her at Winter Outdoor Retailer 2012, at the Salt Palace in Salt Lake City. There, she was dressed in bright red spandex pants, a tight fitting Gibbons Slacklines T-shirt (she’s one of their athletes), red bangs were hanging over her eyes. The rest of her hair was tucked into tight braids. Every time we ran into each other she was smiling and stretching non-stop, like a ballerina.  I couldn’t tell if she was throwing her outstretched legs up on various vendor counters and grabbing her feet for show or impulse. One word describes Libby: Bubbly.

A native of Las Vegas, Sauter began climbing at a school camp outing at age 12. “I got a harness, shoes and a membership to a youth climbing team for my birthday that year,” she said. After a year of training and competitions, she broke her finger in PE class requiring her to get surgery. She started climbing again when she was 20, taking her first trip to Yosemite in 2006.

She attended the University of Nevada before pursuing higher education at Stanford.

We composed the phone interview while she was taking lunch at Stanford’s Surgical Hospital where she works in ICU with children who’ve had surgeries to fix their heart defects. “I’m a nurse with a massive specialization,” she said.

I went straight to college [out of high school], finished in three years. I applied and got accepted to Stanford. My first year in Yosemite I Knew I wanted to be on YOSAR; it took two years to make it happen.

When did you start doing walls?

I tried my first big wall in 2007. We were very unsuccessful (giggling). The Gold Wall  — aid route, not the free climb. After completing the long approach, we got up the first pitch, setup the portaledge and went to sleep. First time setting up a ledge, hauling and things like that. I had two failures before I had any big wall success. What was the other one?

I was with the boy who just dumped me but I couldn’t give up the climbing plans. We were both n00bs. We brought the Middendorf [Big Walls: How to Rock Climb) book. I took three hours to lead the Kor Roof (P4) and didn’t even make it to the belay; I stopped at the bolts before the anchor. I only had a day and a half to do it. I cried.

After that you had more success?

I did Leaning Tower with Amanda Smith from SAR. She had more experience than me. We did [it] as a party of three. Been successful ever since.

How did you prepare for speed climbing the Nose with Astorga? First she led the whole thing and I jugged [ascended the rope] it for her. We both led the whole route once in-a-day. She did it in 15:05 and I did it in 14:26. That was both of our first times climbing the Nose. [Previously] we both had rehearsed [climbing to]  Dolt [Tower, pitch 12 out of 31]. The rest was onsight for us. [Setting the record was] the first time climbing it together as a partnership.

Did you use the PDL?

(Pakistani Death Loop, when the leader fixes the rope to the anchor for the second to jug, but first pulls up all the slack. The PDL essentially means climbing without a belay, just a loop of rope; it’s named after a climber took a 100-foot fall — and lived!)

Do you free climb too, or just do walls?

Great work on the link ups.

I need to do again and do [it] no falls.

Tell me about slacklining.

I slackline a lot. That’s my dorky ambulism [“Latin: walk, take steps, move around; from “to wander, to go astray”]

I understand you walked the highline at the top of the Rostrum with no safety leash?

It’s pretty cool. A way to compare it to climbing — it’s like when you’re above your gear and tell yourself that you can do the move. To calm yourself and do what you know you are able to do.

Do you ever want to free big walls?

I’m an aspiring big wall free climber. I got the ‘princess top rope’ with my boyfriend on Half Dome (VI 5.12a/b). [At the slab crux move near the top] I was like “take me tighter!’

I certainly have aspirations to free climb El Cap one day. Not in my immediate future. I think freeing big walls is the best way to get up them.

I have big plans for this summer. They’re all within the Sierra. I’m open to do some stuff outside of Yosemite and some things that need to be addressed in Yosemite.

Do you want to do the all women’s link up?

Yes, there is potential for this year. We’ll see.

It’s the same for everything in climbing. Psyche is the most important thing. If you’re excited and willing to work hard anyone can do it. When I decided to do the Nose, and lead every pitch, I was super nervous. I never puked before a climb but I couldn’t keep anything down. I thought about bailing and just went for it. Sauter at Stanford’s Surgical Hospital where she works in the children’s ICU.