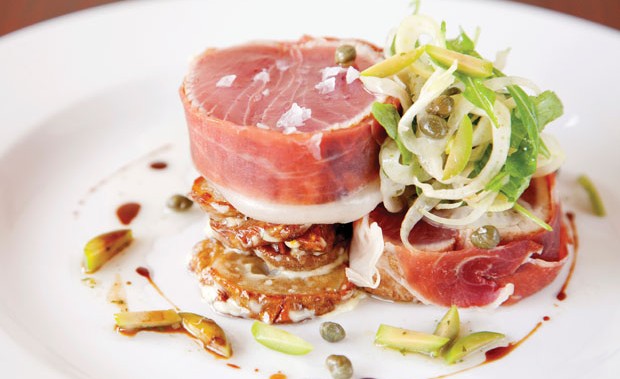 There are so many new restaurants with farm-to-table and locavore offerings springing up in Colorado that there must be some synchronicity with the pastimes of outdoor sports and eating fresh, healthy food. Here’s where you can indulge:

Bittersweet
Denver
Dubbed “our farm in the city,” by its owners, Bittersweet opened in December in a Wash Park building formerly occupied by a gas station. Award-winning Chef Olav Peterson and his wife Melissa were able dedicate 600 square feet for planting, using land directly in front of the restaurant and erecting raised beds around the side patio. The garden produces the lettuces, corn, squash, berries and herbs served inside.
bittersweetdenver.com

Black Cat
Boulder
Since 2006, Black Cat has been dishing up farm fresh fine dining by partnering with local growers. In 2009, chef/owner Eric Skokan went one step further; creating a 70-acre farm that cultivates 250 different varieties of lettuces, vegetables and herbs, and eight different kinds of livestock. For the second year in a row, Black Cat Farm is offering Community Supported Agriculture (CSA) shares in an effort to become an incubator for the further development of Front Range cuisine.
blackcatboulder.com

Colterra
Niwot
Chef/owner Bradford Heap has been planting the organic beds around Colterra since the restaurant’s inception in 2006. But this year, he’s armed and dangerous with a new sprinkler system and a more aggressive plan to cultivate as many of the restaurant’s greens, vegetables, herbs and edible flowers as possible from the 1,000-square-foot garden surrounding the patio.
colterra.com

Fruition
Denver
Fruition’s 10-acre farm in Larkspur turned two years old at press time, which is hard to believe when you look at how far chef/co-owner Alex Seidel has taken it in such a short time. Besides providing the herbs and produce to create the restaurant’s “sophisticated comfort food,” the farm also houses more than a dozen egg-laying chickens and 70 sheep producing two varieties of cheese.
fruitionrestaurant.com

Gaia Bistro
Denver
Patrick Mangold-White and Jon Edwards have been sourcing herbs and veggies from Gaia’s backyard since they opened the organic bistro in 2006. In fact, there’s barely any space left behind the charming Victorian thanks to three 8-foot by 16-foot plots, an herb garden, grapevines, and rhubarb stuffed into every spare nook. At press time, the rhubarb was ready to start producing strawberry-rhubarb crepes–a summertime customer favorite.
gaiabistro.com

Meadow Lark Farm Dinners
Boulder
Meadow Lark hosts dinners twice a week from June to October at one of eleven local farms in locations ranging from Brighton to Lyons. Chefs create meals on the spot, based on the farm’s daily harvest, and prepare them in a school bus that’s been retrofitted with a gourmet kitchen.
farmdinners.com

Ski Bums Till Earth
In April 2009, ski guide Eric Henderson broke his neck in Alaska. He was lucky to be alive. To help recover back home in Victor, Idaho, Henderson and his now-wife Megan pulled some tables out into a field at their Blue Flax Farmand

began On the Farm, serving family style meals to about 50 guests at a sitting, with each meal featuring a local producer and all ingredients sourced within 25 miles of the garden.

“We spread the word, via Facebook, farmer’s markets, hotels and local shops,” says Henderson.“ It’s the closest I will ever come to being a preacher. To me food knows no boundaries and I feel empowered to help spread this message.”

Henderson is not the only skier tunred local food advocate. Alison Gannett has gained fame not just as an extreme athlete but as an environmental activist as well. Her Save Our Snow Foundation fights climate change and her Holy Terror Farm, which she founded in Paonia with Jason Trimm, is that activism in action. The organic farm espouses the local farming ethics from her online farmers market cooperative LocalFarmsFirst.com.

“We are now almost 100 percent self-sufficient, and sell hundreds of varieties of harvested-to-order veggies, fruit, berries, beef, pork, eggs and chicken on this farm-to-table market,” she says.