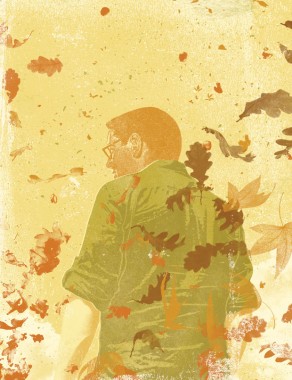 Nothing measures a man’s life like the fall, with its slow parade of ascending grades and summers just over, and all the burnt orange and yellow beauty of another changing season everywhere. It is an easy metaphor for life, how we celebrate the harvest in the face of the cold ground and the chill air. And how all of the holidays—Halloween then Thanksgiving and Christmas and New Year’s—start to line up in honor of everything that went before.

But if I find myself getting caught in that honey glow of nostalgia a little more than usual, it’s because I am thinking a lot about my father. One of those great men who most people will never know, who was great because he gave his kids the world, he has reached that point in his life where all of the memories are now becoming his childrens’ to hold. As one of those kids who keeps realizing just how good I got it, here is what I would like to thank him for the most.

My dad was the first person in his family to go to college. He was a captain in the Air Force who moved his family to Colorado so that he could be a ski bum on the weekends and on the weekdays study law. I remember how disappointed he was when he came home from a parent-teacher conference and told me, “You can get a ‘D’ if you have to. Even an ‘F’. But I never want to hear that you’re not trying anymore.” For all the potential lottery, lawsuit or wildly wealthy life-partner award-winners still waiting for a shortcut out there, it’s my anecdotal reminder that hard work will always succeed like nothing else.

Raising Me in Colorado

I can’t think of a better place to grow up than here, where the mountains mark the horizon and we are all just a little bit stronger, and higher, on the thin alpine air. For all of the days we spent skiing soft snow, hiking in alpenglow, swimming in cold creeks, picking wild raspberries, spotting fat marmots and watching hawks spin through the sky, I will forever be grateful. I think there is no greater freedom than having the great outdoors right outside your door.

A Sense of Adventure

My dad never met a sport—or an adventure—that he didn’t like. Sometimes with instructors or guides, or sometimes just by himself, he learned to rock climb, run marathons, sail Lasers and Hobie Cats and J-24s and Olson 30s (all in Colorado, and in Nebraska at Lake McConaughy), and how to telemark on cross-country skis and how to soar above the Flatirons in a glider and train tracking dogs and do about a dozen other things I probably never knew about. When I asked him his secret he said it was my mother, “Who does all those things with me. It’s the greatest thing in the world.”

His love for mom is unequivocal. I remember once I said something smart to her on the phone. He rang a minute later. He said, “Talk to your mom how you want. But no one talks like that to my wife.” That little window of the 20 minutes it took for him to get home still makes me shake. I only heard that voice one other time, when he was talking to someone who rear-ended me and didn’t want to pay for the damages, and he said, “Let me give you my address. I can’t wait to meet the man brave enough to call me an ‘asshole’ over the phone face-to-face.”

For everyone who followed the story about that guy who left his dog Missy on Mount Bierstadt this summer (I know, I feel the same way), my dad had a similar experience with his German Shepherd, Sohn. He was near the summit on Mount Princeton when the dog screamed out and collapsed. And when he couldn’t carry him off the mountain himself, he hiked all the way down and then all the way back up with two students from Colorado Mountain College who had a stretcher to bring Sohn down. He waited to die until my dad came back, then dropped with a sigh. I like to think he knew at least he hadn’t been left. I still roll down my window and call out that dog’s name whenever I drive by that peak.

My dad grew up on Elvis and the Beatles, and there was always the sound of the Eagles and Bob Dylan playing in our house. He took us to see John Denver and Chuck Mangione at Red Rocks. And he saw Dylan out in a rainy field. When he bought us tickets to see the Stones in Albuquerque, concert security tried to find who was smoking the joint that I brought, and I still laugh imagining what it would have sounded like if I had to call my mom. At every wedding we ever went to, as soon as the band started, they were always the first to dance. Thank God for parents who rock.

Of course, if it weren’t for my dad, I would’ve never known what Elwayville looks—and feels—like. Other than the two Super Bowl wins and even a couple of the Tebow victories (the dude was alright, but I don’t miss him that much), the games that I watched with dad, either at Mile High Stadium or on TV in the basement, are the games I remember the most. I remember how that tin can cathedral shook like an earthquake whenever Elway dropped back to pass. How we drove through a December blizzard to see a game when there was still more than a foot of snow on the seats. And how glorious Sunday in the fall always felt, with your family and all your Broncos friends, and all that snow about to cover the peaks.

It’s been an incredible ride so far, and I am grateful for the driver. Thanks, dad. Everything is perfect. •

Peter Kray is Elevation Outdoors’ editor-at-large  and co-founder of The Gear Institute (gearinstitute.com).