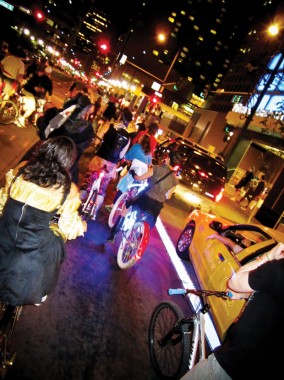 Take Back the Streets

Something wild, rolling and strange can be seen taking over the streets of downtown Denver every Wednesday night from mid-May through September: Hundreds, make that thousands, of Denverites dressed in full coordinated costumes hop on their bicycles for what has now grown to become the largest regular weekly social ride in the nation.

Now in it’s 8th year, the Denver Cruiser Ride embodies the essence of what it means to have fun on bikes. “What started as bar crawl on bicycles with 13 friends in 2005 has somehow mushroomed into Denver being host to the largest weekly ride in the U.S.,” says ride founder Brad Evans. “More than a thousand people show up each Wednesday dressed in full regalia to themes ranging from Pirates and Sea Men to Hobos and Hillbillies.”

In the midst of the hoopla, Evans has become an advocate for not only fun on bikes, but also bicycle safety, two-wheeled transportation and a growing national movement of weekly social rides. It wasn’t a path he imagined. His past includes careers as a graphic designer, a controversial visual artist and a top-selling Colorado realtor. “As the ride grew, it became clear that someone was going to have to step up and be responsible for answering to the authorities,” he says. “I refused to go the anarchist route and see it disintegrate, so I stepped into the responsibility of being the leader of this ship of fools.”

Contrary to popular perception, and unlike it’s less-cohesive Boulder counterpart, the Denver Cruiser Ride is not a drunken, anarchist, free-for-all. Nor does it follow the notoriously irreverent critical mass protocol. “Our model is critical manners,” says Evans. “We stop at lights and share the road with other users. I like to think of our ride as a well-oiled machine that supports the concept of fun, and the freedom that can only be had at the helm of a two- (and sometimes three-) wheeled contraption called a bicycle.”

That’s not just lip service. Evans partners with the Denver Police Department and local representatives to create good will between the city and the Denver Cruiser Ride. He created a rider safety campaign and printed spoke cards with safety information that the police hand out to cyclists stopped for traffic violations, instead of issuing a ticket

Banking on the success of the Denver Cruiser Ride, Evans founded the Denver Wheel Club (denverwheelclub.com) in February, re-opening the defunct Club 404 at 4th and Broadway. “A local watering hole that caters to Denver’s cruiser population just seemed like a logical next step,” says Evans. The Denver Wheel Club takes its name from a historic cycling club in the city that was a major social and political force at the turn of the century. “Ultimately the Wheel Club is a part of the social aspects of the Denver Cruiser Ride, and the embodiment of what you can do if you commit to an idea and stick with it until its fruition.”

For ride start locations and themes go to denvercruisers.com.