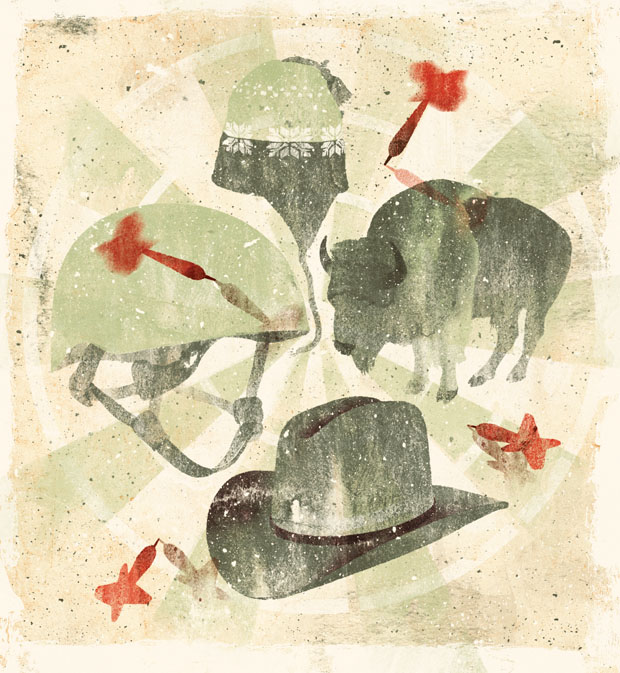 I’m old enough to remember mixed tapes, especially one we passed around in college titled, “Saabs, Quattros and Wagoneers.” I can’t remember a single song that was on it, except that it was some sort of Freedom Rock meets punk rock meets classic rock mash-up. What was important was the title, a backhanded tribute to a guy everyone knew as Rado Dude. Rado was one of those guys who drives you crazy, but is your buddy, too. His biggest problem was whenever he got nervous, he would start bragging about how Colorado was the coolest place in the world.

But we all tried to wrap ourselves in that aura of place—we thought that just being from Colorado made us cooler than we really were. It’s just that ‘Rado always took it a little too far. His shtick was that the whole state was just L.A. at altitude, where everything’s a scene, and all the rock-climbing, powder-skiing, condominium-owning pot growers are all too hip to care. The clincher, was when some kid from the East Coast asked him, “So what does everybody drive out here?”

Anytime I remember that line, in my mind I-70 becomes this asphalt River Styx leading right into Yuppie Hell in which we’re all just a bunch of air-conditioned zombies listening to Sting on KBCO.

But Colorado is really nothing like that. That’s just the part of Colorado the realtors are trying to sell. Drive down Federal at noon and you’d think the state was made of green chile roasters, that everyone still drove Pontiacs and Pintos. Get south of Belleview on a Sunday and there’s still real hay in the bed of those F150s and S10s. And those are definitely real gun racks in the back windows.

The point is that in every CO zip code, there is always a different sense of what it means to live here. I’ve always thought of Coloradoans as a kind of happy mix of western attitudes—encompassing the mountains, the city and the eastern arc of the prairie—and that our elevation was our unique bond. But that’s not nearly as much fun as sticking stereotypes on people for the sake of making sweeping generalizations about who they are. Or in the spirit of old ‘Rado himself saying, “This state’s just filled with Ropers, Dopers and Dudes.”

Ropers: This is still cowboy country. It always will be, too. From the Arapaho who first lived here to the original Colorado cattlemen to all the 4-H clubs and the annual “yee-haw” extravaganza that is the National Western Stock Show, ropelines run deep in this state. And after deep powder skiing, cowboys and Indians are what out-of-staters still imagine Colorado is all about. Even though I grew up near City Park, I had cousins back East who thought the Pony Express was how we got our mail. And between the reality of the working ranches and the mirage of guys in cowboy hats working the scene in Lo-Do, sometimes it’s hard to tell the difference between the pardners and the poseurs here. Tell the next one you see, “I’d like to take you to Brokeback Mountain,” and if he knocks your teeth out, he’s probably the real deal. If he doesn’t? Well, you’re on your own from there.

Dopers: Medical marijuana is doing a lot more than Elwayville’s altitude to elevate its reputation as the highest city in the world. That should only continue to increase as late breaking news out of Amsterdam is that a new conservative government has signed a law barring tourists from the hash bars. So does that mean we’re going to see an increasing wave of medical marijuana vacationers? Is now a good time to finally launch your ‘Pot, Powder and Pizza’ package tours? Not likely. But it does mean a lot more stoners from across the country are considering moving here. If that will automatically result in more drum circles in Boulder, or Widespread Panic shows at Red Rocks, I don’t know. I do know it’s more fun to laugh about than the geriatric gang in Aspen that got busted for operating a major cocaine ring a few weeks ago. Or the out-of-control meth use. An attorney friend once told me he gets calls almost daily to defend some tweaker who, after being high for 10 days, committed some spectacularly stupid crime like trying to break into a jewelry store that wasn’t closed.

Dudes: Somewhere in the micro-brew swilling middle of it all are the Dudes. A little bit like old ‘Rado himself, with a mountain bike, some backcountry skis and a Grateful Dead sticker on his lacrosse stick, Frisbee or Saab, he is the kind of guy who likes to work as hard at his fun as he does at his job as an editor, realtor, architectural landscaper, publicist or personal trainer. As fond of quoting Thomas Friedman as Robert Hunter, he is either posting that he is at the airport again on Facebook, planning a trip to Moab or reading Elevation Outdoors. Easily distracted by texting, ski area webcams and ladies in yoga clothes, a Dude will gladly take an hour to tell you about the novel he has been working on for the past 10 years. Part River Runs Through It, part Catcher in the Rye, part Cliffhanger, “it’s the real story of the Rockies that’s never been told.” (You can easily end this conversation by asking to see a chapter or two). Remarkably well-versed in the Rolling Stones discography, website design, movie quotes and Costa Rican land rights, he can often not recall what he had for breakfast an hour ago. Next time you see one, say, “Yo, dude,” and then he will know that you’re from Colorado, too.