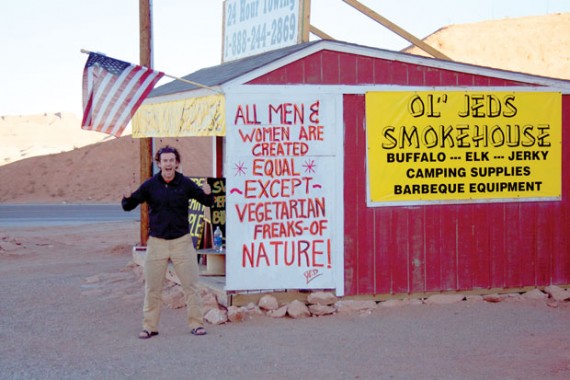 Primal Throwdown, Food and nutrition are the buzzwords when it comes to outdoor athletes these days. Everyone has an idea on how you should eat. And some go to extremes. So we asked our readers which “extreme” diet was better—vegetarian/vegan or Paleo. The response was split 50/50, so we asked Bohemian heartthrob Brendan Leonard and paleo stud Andrew Zimmerman to debate what they put in their mouths.

I have a hard time giving anyone shit about their diet, after almost seven years of explaining mine to people. But vegetarianism is pretty simple: I don’t eat animals. Does it contain cow parts, pig parts, chicken parts or fish parts? OK, I’m not eating it. Yes, there are some nuances—I am not vegan. I eat eggs (I’m pro-choice) and dairy (and pro-Ben & Jerry’s); vegan folks do not. But I can’t eat Twinkies (they contain beef fat), Jell-O (gelatin = made from pig parts and cow parts). Other than that, it’s pretty straightforward. If it has a face, I don’t eat it. Including puppies.

The Paleo diet, that’s quite a bit more complicated. After dining with friends who have adopted it, I have come to the conclusion that if you are Paleo, we are pretty much never going to date. I feel like I need an iPhone app to consult to figure out all the rules of the paleo diet—no potatoes, no peanuts, gasp—no corn tortillas? Or beer? I mean, I like a lot of things that came after the Neanderthal period, like burritos, chocolate soy milk, French toast and, you know, the wheel, the 40-hour work week and the decreased use of the club in interpersonal relations.

We are different. I eat no animals. You eat lots of animals. Your dietary role model has a unibrow and is new to walking upright and using tools. My dietary role models are Steph Davis and Scott Jurek, who crush so hard it makes me wonder if I should just go all the way vegan like them. But you know, I feel their pain a little bit, when I think of what they probably deal with trying to order a restaurant meal, especially when I remember that there are many regions of our country where salmon is considered vegetarian, as are dishes that contain “just bacon.” I guess maybe we could hang out and make salads sometime. Or omelettes. Which apparently we would have to cook in coconut oil or palm oil? Remind me.

Brendan Leonard is a climber and writer who completed a 3,000-mile bike tour without eating animals. His father has been in the meat cutting business for 37 years.

Brendan and other vegetarians make dietary decisions based on the presence or absence of animal products, regardless of the food source or processing involved. They cite oral, political, and, unbelievably, nutritional reasons for being vegetarian, but what place do these modern-day thought processes have in the role of evolution? None when you look at the science. The Paleo Diet is based on our hunter and gatherer ancestors who ate a variety of meats, non-starchy vegetables, wild fruits and nuts, and had no processed foods. It’s that simple!

Meat, available year-round, was the essential nutrient-dense food needed for the evolution of the human body. We know this because the essential amino acids and fatty acids that our bodies cannot create can only be found in animals and eggs. Additionally, many nutrients are only absorbed in the presence of animal fats and require near exact balances of these essential nutrients. The Paleo Diet is in sync with the way our bodies were designed to metabolize food and store energy. It works and it doesn’t require dating Brendan or eating puppies.

Vegetarianism is out of line with the human body. To digest cellulose, the main material in plant cell walls, a specialized digestive system is required. A cow, for example, has three stomachs and must regurgitate and re-chew its food all day to insure proper preparation for the fermentative bacterium that actually digest the cellulose.

The key is optimal human nutrition in line with our evolution. We are animals and it’s counterintuitive to drastically change our diet from how it evolved. Humans are meat-eaters who supplement our diet with some vegetables, fruits and nuts. On a vegetarian diet you’re forced to overcome massive nutritional limitations. The Paleo Diet fuels the body for the way it was designed, the way we evolved.

Andrew Zimmerman is the strength and conditioning coach for the Denver Cutthroats Hockey Club.

The resources for any substantial number of humans to eat the meat-heavy Paleo diet just do not exist. Already 40 percent of land area on earth is used for producing human food and products. So will we use 200 percent of the earth’s surface area to produce all that grass-fed beef? Meat production uses more land area, water, carbon emissions and soil fertility than growing plants. The world’s current consumption of meat and fish is already straining ecosystems to the breaking point. Everybody eating more meat for the Paleo fad will break those systems that much faster. Plus, recent archaeological evidence shows that ancient humans ate a lot less meat than Paleo, and they ate wild grasses (“grains”) too. And finally, a recent NY Times article mentioned that C-reactive and other indications of cardiovascular inflammation skyrocketed after a short period on the Paleo diet. There is a reason that vegetarians live seven years longer than meat eaters on average.

Get ready for our next question, dear readers: Coffee v. Beer—Which beverage is better for performance?