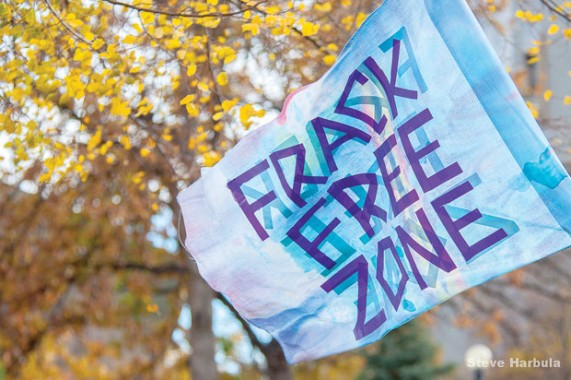 A new Colorado non-profit wants to shut down fracking in the state.

Gallons of freshwater per well: 2-8 million

Statistics like these recently inspired companies and concerned citizens to join forces in the fight against hydraulic fracturing, a.k.a. fracking, a technique that forces strong streams of water, sand and chemicals deep into the ground to create fissures that unearth stores of oil and gas.

Frack Free Colorado, seeks to school the masses on the latest science about fracking and its effect on Colorado communities. Evidence has shown that fracking contaminates water resources, pollutes the air and soil and exposes countless people to endocrine disruptors, carcinogens and toxicants that can harm the nervous system. In addition, fracking permanently removes water from the system, a particular concern for Southwestern states enduring years of drought. Oil and gas companies estimate that they will use 6.5 billion gallons of Colorado’s water this year, enough to fill almost 10,000 Olympic swimming pools.

“We have the power to stop these dangerous practices,” says Allison Wolff, CEO of Vibrant Planet and co-organizer of Frack Free Colorado. She hopes to mobilize Coloradoans to secure a fracking moratorium, similar to the one spurred by the citizens of New York.

“The path ahead should not favor a short-term grab that will forever negatively impact our public land for the profit of private corporations,” says Peter Metcalf, CEO of Black Diamond, a coalition sponsor. “It should instead seek solutions that are clean, sustainable and economically durable.”

To raise awareness, Frack Free Colorado will host  events—like one in Denver last October that featured Daryl Hannah, Mariel Hemingway, acclaimed ecologist and author Sandra Steingraber  and local acoustic band Elephant Revival—and provide opportunities for people to raise their voices until Governor Hinkenlooper, who earned the nickname “Frackenlooper” earlier this year because of his outward support of big business, takes notice and honors the desire of his constituents by adopting a concrete plan that moves the state toward a renewable energy economy. frackfreeco.com