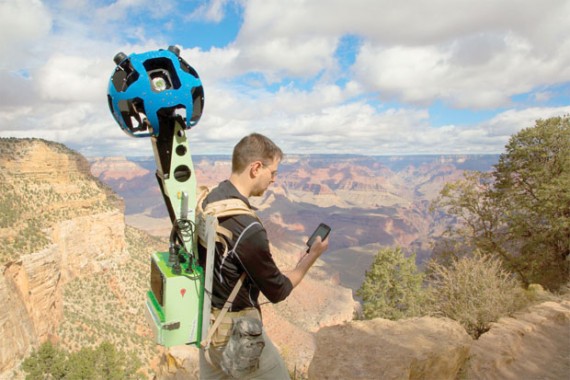 Eye on the Trail

out of range? google-ing the wild. Courtesy of google

A new backpack-contained system takes Google into the wilderness

Google Street View has already moved beyond the pavement, providing panoramic 360-degree views of art museums, Antarctica and even the Great Barrier Reef. Now Google has devised a wearable backpack-mounted camera system, dubbed the Trekker, to take Street View into the backcountry.

The company has already used tricked-out cars, trikes and snowmobiles to feed images to Google Maps. The Trekker will extend their reach even further, documenting remote wilderness areas that can only be accessed the old-fashioned way—on foot.

The operator controls the unit with an Android phone and automatically captures photos while walking. The cameras send image and location data to an on-board hard drive. The images are later downloaded and stitched before landing on Google Maps.

Google has spent more than a year developing the Android-controlled Trekker unit. After early Nordic ski test runs near Tahoe last winter, this past October the Street View team took their first official excursion: a test-hike down the Grand Canyon’s Bright Angel and Kaibab Trails.

The Trekker sports some serious hardware. Its camera housing is a beach-ball-sized orb festooned with more than a dozen five-pixel cameras. To achieve an unimpeded 360-degree view, the housing mounts to a lightweight arm extending above the wearer’s head.

A lightweight computer running Android powers the on-board hard drive, and two beefy batteries provide enough juice to keep the unit running all day. With all this gear, the Trekker is not an ultra light affair. Base pack weight clocks in at 40 pounds, begging the question: will the Trekker’s human transport mechanism run out of juice first?

At the time of writing we’re still waiting for 360-degree panoramas from the Kaibab to show up on Google Maps. Also, no word yet on job openings for Trekker operators, so don’t ditch your 9-to-5 gig just yet.