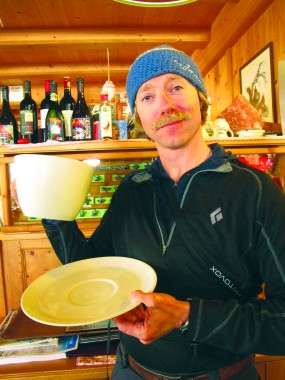 is it even a contest? one leaves you shaky, the other shakes you down. Courtesy of Frederick Reimers

It’s a simple question that has puzzled great minds. Coffee or beer? We asked our readers and 60 percent of you chose coffee. Really readers? For some insight, we asked EO editor-at-large Peter Kray and Powder’s Mike Rogge to argue for their beverage of choice.

Coffee vs. beer: has there ever been a greater debate? It’s like arguing day against night, the sun against the moon or redheads versus blondes (redheads would win, just ask one). It is quite literally comparing the promise of a bright new morning with the celebration of a beautiful sunset and a day well done. But if I have to choose just one—and thank the Patron Saint of Moderation that I don’t—then I’ll roll with java, because coffee gets shit done.

Coffee gets you out of bed, on the trail, at the desk, counting up the miles and cranking out the copy every morning while all of those tea drinkers are still surfing Facebook, and all the heady, heady beer drinkers are still sleeping in. Coffee is initiative, inspiration  and nature’s most perfect renewable black oil source of individual ignition—“3,2,1, bring it on, Monday, I’ll take you down!” To paraphrase the late great James Brown (and the cover lines on a recent issue of Powder magazine), coffee is the “Get Up You Need to Get Down.” It’s the “De-Caf-is-for-quitters” spewing drill sergeant who helps you kick incredible butt before lunchtime rolls around.

And the best thing about coffee is that it’s looking out for you: it helps you do the work, gets to first chair, breaks trail before the sun. Not like beer, which is much more apt to crash your bike, pee in your closet and hit on your cousin’s girlfriend. When beer lost your wallet, coffee helped you find it; same with your parka, and more than a few momentarily-MIA best friends. Anytime you’re trying to put it all back together in the morning, beer won’t even pick up the phone.

I love them both—a lot. But I am a more apt to bring coffee to dinner than I am to bring beer to breakfast. Coffee is my steadier friend.

Peter Kray is only still with us thanks to coffee. Here’s something no one in his right mind has or will ever say: “Coffee is better than beer.”

Coffee is the energy drink for adults. If not enjoyed in moderation, it’ll have you shaking like a Mexican space shuttle. Beer, on the other hand, is awesome.

And that’s not all. After a few beers this will happen:

Beer brought my girlfriend, a sexy blonde skier from Squaw, and I together. We didn’t accidently meet at a coffee house softly playing the newest Grizzly Bear album. No, we met at a party, where beer and his friends Whiskey and Tequila, magically introduced us on the dance floor during a White Snake song. We’ve been together for almost a year and things are going great. Thanks beer.

But as Peter said, both in moderation are the right choice. A recent study by the Harvard School of Medicine determined that drinking both beer and coffee could significantly reduce the risk of developing colon cancer, which is great news if you’re an early-rising, party asshole like Kray and me. Coffee gets you up, but with beer you’re more likely to get down… in a hot tub after a great day of powder skiing.

Mike Rogge is the Managing Editor at Powder magazine. He loves hot tubs and regrets not making a Kanye West joke aimed at Peter about “shit being Kray” in this piece.

“Coffee gets it done, beer gets it… undone?” —Marc Johnson

“Why either or? Coffee before, beer after. Done.” —TommyVee