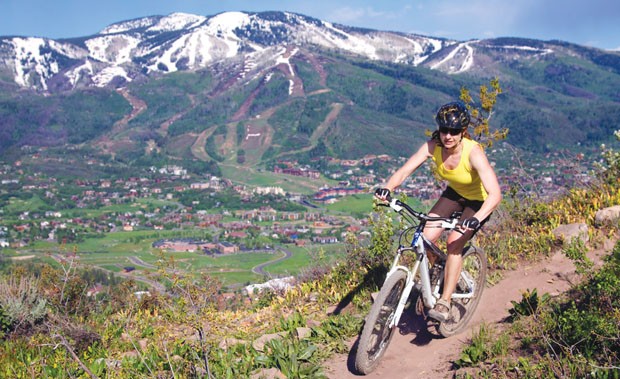 This October, Steamboat Springs, Colorado, held its second annual Steamboat Bike Summit, a four-day public forum bringing together locals and experts on topics including bike lanes for school children, town trail signage, mountain bike parks integrated into the ski hill infrastructure and camaraderie and competition for all. The summit’s mission was simple yet powerful—to promote economic development, lifestyle enhancement and tourism through cycling. The way things are going, Steamboat just may live up to its self-appointed status of Bike Town USA. How can anyone argue otherwise when the town is set in a picture-perfect backdrop of aspen-covered hills, with a paved bike path stretching from one end of town to the other, wide shoulders and a seemingly endless network of well-maintained single track?

Steamboat recently received Gold Level status as a Bicycle Friendly Community from the League of American Cyclists, one of only 14 communities in the country. Organizers hope to achieve Platinum status in 2013 by completing improvements already underway such as expanding core trail signage, adding map kiosks and even more miles of bike trails. The coup d’état is this year’s introduction of a feature-rich bike park, created on the front side of Mt. Werner ski hill by Gravity Logic, the well-known bike-park builder from Whistler, B.C., whose giant bike park there draws over 100,000 visitors per year.

Steamboat hopes to tap into the estimated 57 million bicycling enthusiasts nationwide (League of American Cyclists), as compared to the only 10 million skiers and boarders cataloged by the National Ski Areas Association. The trick, committee organizers say, is to maximize assets already in place—infrastructure like ski lifts, service roads, restaurants, rental shops and lodging.

“First and foremost, Steamboat as Bike Town USA is for the community,” explains local committee member Paige Boucher. “We’ve put lots of effort into some amazing new trails, we’ve hosted some great events including the Pro Cycling Challenge at a national level, but most importantly we’ve made some important improvements that make our trails, roads and bike paths safer for our kids and our neighbors. Steamboat Bike Town USA is a vision that people can draw inspiration from and will evolve to make Steamboat an even better place to ride bikes for locals and visitors.”

For more information about Steamboat’s biking initiatives, and how to promote the growth of cycling in your town, visit: steamboatbiketown.com